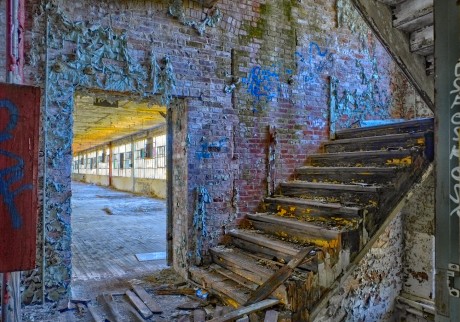 In 1891, the firm of J. R. Montgomery & Co. was merged into a corporation under the name of The J. R. Montgomery Co., of which J. R. Montgomery, President, and George M. Montgomery, Vice-President and Secretary, are the active managers. A new cotton warp mill and an addition to the Novelty Mill was built. The capital of $350,000 was invested in enlarging and increasing the scope of its business.

The machinery of the new factory of the J. R Montgomery Company is gradually being put into operation as fast as the various processes involved will allow. The completion of this building, states the Windsor Locks Journal, marks a new epoch in the prosperity of the town. Standing on the canal bank with its five stories beside the basement, and its frontage of 173 feet, it presents a handsome and imposing appearance. Its width is 63 feet, and it is so built as to connect with and open into the former five story building on the north, making a frontage of 248 feet. The designer is Fred. S. Hines of Boston and the contractors C. H. Hathaway & Co., of Providence, R. I. The work was begun early last Spring and has continued without interruption or accident. In its construction and equipment it embodies all the latest improvements in every feature, as regards fire proofing, heating, lighting, the distribution of power, etc.

All the power and lighting in the new mill is supplied by electricity, and the electrical plant is one of the most complete in this section of the country. The cotton machinery is all new and of modern construction for the manufacture of high grade yarns and warps. A combing plant has been installed for making a higher grade of work than heretofore attempted in that line. It is the intention of the company to continue along the same lines as in the past, but to improve the quality of the output, and to add to its reputation for high grade goods.

In the 1890s, the company began producing tinsel products, eventually becoming the country’s largest manufacturer of decorative and electric tinsels. In 1920, the Montgomery Company purchased the adjacent Anchor Mills Paper Company building, razing it and building a new white reinforced concrete building, which extended southwards from the 1891/1905 structure. The Montgomery Company ended its operations in Windsor Locks in 1989 and the factory buildings have since remained vacant, suffering fires in 2006, 2009 and again earlier this year. Since 2009, the Town of Windsor Locks has been attempting to foreclose on the now burned-out buildings. ( From The Historic Buildings of Connecticut site )

Welcome to my Blog

This site contains photographs from my Urban Explorations & a little bit more
Check out my E-books:

An Evening at the Opera

From Photographs to Paintings

At the RD Farm